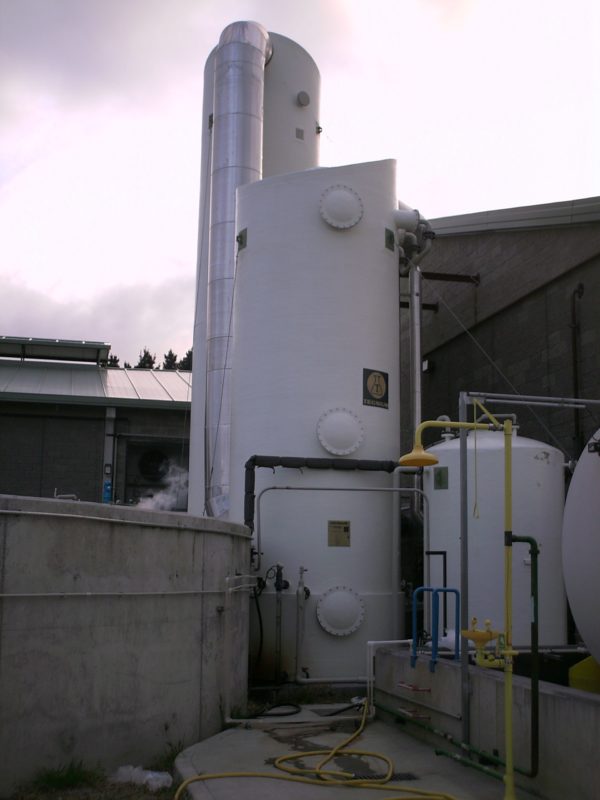 In such plants usually lixiviates with NH3 dissolved are produced. This ammonia must be degassed before disponsing these waters away.

The most common in this type of plants is to perform a two-step process:

In this first stage, a stripping or degassing of NH3 contained in the liquid effluent is performed. This gets into a stripper in which air is injected counterflow. To promote degassing previously an alkaline pH is set. The obtained liquid is collected in a tank where by means of an automatic pH control, H2SO4 is dossified to obtain a final pH around 7.

In this second stage the air contaminated with NH3 from the previous stage is fed to a scrubber in which a solution of H2SO4 is recirculated, with automatically controlled pH,  producing a solution of (NH4) 2SO4 that once reached a concentration close to 40 % is discharged to a storage tank . This concentration is measured by a conductivity controller .

We must emphasize that the air circulates in a closed loop to preserve heat energy , thus favoring the degassing, which would be impossible if outside air is continuously introduced.

It should also be added that if the effluent to be treated has no solids is not expected clogging of the packing. However during the first months of operation it will be necessary inspections of the packing fill and bottom of stripper and scrubber .

Give us your contact details and we will advise you on the best solution for your application.

14th April 2020 Dear Clients and Partners, We inform you that today and in accordance with the measures taken by the Spanish Government, our productive activity is back to usual, always taking all prevention and [...]

You can find out more about which cookies we are using or switch them off in settings.

This website uses cookies so that we can provide you with the best user experience possible. Cookie information is stored in your browser and performs functions such as recognising you when you return to our website and helping our team to understand which sections of the website you find most interesting and useful.

Strictly Necessary Cookie should be enabled at all times so that we can save your preferences for cookie settings.

If you disable this cookie, we will not be able to save your preferences. This means that every time you visit this website you will need to enable or disable cookies again.

This website uses Google Analytics to collect anonymous information such as the number of visitors to the site, and the most popular pages.

Please enable Strictly Necessary Cookies first so that we can save your preferences!